The Full Story Behind Angela Davis’ Speech At Women’s March

Angela Davis was born in Birmingham, Alabama. The family lived in the “Dynamite Hill” neighborhood, which was marked in the 1950s by the bombings of houses of middle-class blacks who had moved into the area.

Davis attended Carrie A. Tuggle School, a segregated black elementary school. During this time Davis’ mother, Sallye Bell Davis, was a national officer and leading organizer of the Southern Negro Youth Congress, an organization influenced by the Communist Party, which was trying to build alliances among African Americans in the South. Consequently, Davis grew up surrounded by communist organizers and thinkers who significantly influenced her intellectual development.

Davis was awarded a scholarship to Brandeis University in Waltham, Massachusetts, where she was one of three black students in her freshman class. She initially felt alienated by the isolation of the campus, but she soon made friends with foreign students.

Davis became a supporter of the Soledad Brothers, three inmates accused of killing a prison guard at Soledad Prison.

On August 7, 1970, Jonathan Jackson, a heavily armed, 17-year-old African-American high-school student, gained control over a courtroom in Marin County, California. Once in the courtroom, Jackson armed the black defendants and took Judge Harold Haley, the prosecutor, and three female jurors as hostages. As Jackson transported the hostages and two black convicts away from the courtroom, the police began shooting at the vehicle. The judge and the three black men were killed in the melee; one of the jurors and the prosecutor were injured. The firearms which Jackson used in the attack, including the shotgun used to kill Judge Haley, had been purchased by Davis two days prior and the barrel of the shotgun had been sawn off. Davis was found to have been corresponding with one of the inmates involved. 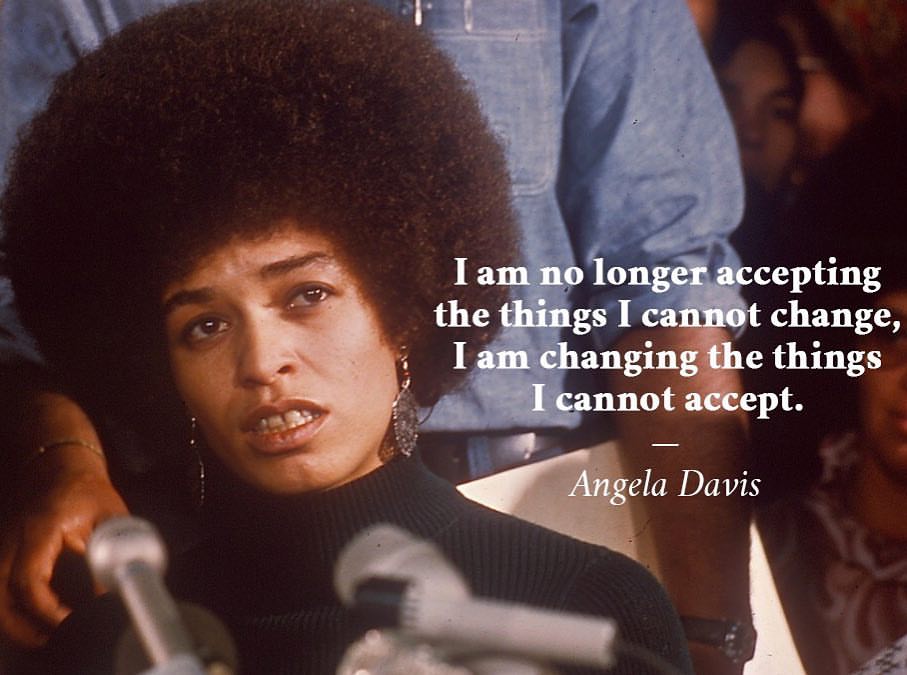 As California considers “all persons concerned in the commission of a crime, whether they directly commit the act constituting the offense… principals in any crime so committed”, Marin County Superior Judge Peter Allen Smith charged Davis with “aggravated kidnapping and first degree murder in the death of Judge Harold Haley” and issued a warrant for her arrest. Hours after the judge issued the warrant on August 14, 1970, a massive attempt to locate and arrest Angela Davis began. On August 18, 1970, four days after the initial warrant was issued, the FBI director J. Edgar Hoover listed Davis as the third woman and the 309th person to appear on the FBI’s Ten Most Wanted Fugitive List.

Soon after, Davis became a fugitive and fled California. According to her autobiography, during this time she hid in friends’ homes and moved at night. On October 13, 1970, FBI agents found her at a Howard Johnson Motor Lodge in New York City. President Richard M. Nixon congratulated the FBI on its “capture of the dangerous terrorist, Angela Davis.”

On January 5, 1971, Davis appeared at the Marin County Superior Court and declared her innocence before the court and nation: “I now declare publicly before the court, before the people of this country that I am innocent of all charges which have been leveled against me by the state of California.”

While being held in the Women’s Detention Center, Davis was initially segregated from other prisoners, in what she referred to as solitary confinement. With the help of her legal team, she obtained a federal court order to get out of the segregated area.

Across the nation, thousands of people began organizing a movement to gain her release. In New York City, black writers formed a committee called the Black People in Defense of Angela Davis. By February 1971 more than 200 local committees in the United States, and 67 in foreign countries, worked to free Davis from prison. John Lennon and Yoko Ono contributed to this campaign with the song: “Angela” In 1972, after a sixteen-month incarceration, the state allowed her release on bail from county jail. On February 23, 1972, Rodger McAfee, a dairy farmer from Fresno, California, paid her $100,000 bail with the help of Steve Sparacino, a wealthy business owner. Portions of her legal defense expenses were paid for by the United Presbyterian Church.

A defense motion for a change of venue was granted and the trial was moved to Santa Clara County. On June 4, 1972, after three days of deliberations, the all-white jury returned a verdict of not guilty.

Today she’s a retired professor of University of California, Santa Cruz, in its History of Consciousness Department and a former director of the university’s Feminist Studies department. She recently spoke at the Women’s March alongside Gloria Steinem, Madonna, Alicia Keys, transgender activist and author Janet Mock, singer and actress Janelle Monáe, actress Ashley Judd, Planned Parenthood’s Cecile Richards. Below is a transcript of her speech”

“At a challenging moment in our history, let us remind ourselves that we the hundreds of thousands, the millions of women, trans-people, men and youth who are here at the Women’s March, we represent the powerful forces of change that are determined to prevent the dying cultures of racism, hetero-patriarchy from rising again.

“We recognize that we are collective agents of history and that history cannot be deleted like web pages. We know that we gather this afternoon on indigenous land and we follow the lead of the first peoples who despite massive genocidal violence have never relinquished the struggle for land, water, culture, their people. We especially salute today the Standing Rock Sioux.

“The freedom struggles of black people that have shaped the very nature of this country’s history cannot be deleted with the sweep of a hand. We cannot be made to forget that black lives do matter. This is a country anchored in slavery and colonialism, which means for better or for worse the very history of the United States is a history of immigration and enslavement. Spreading xenophobia, hurling accusations of murder and rape and building walls will not erase history.

“No human being is illegal.

“This is a women’s march and this women’s march represents the promise of feminism as against the pernicious powers of state violence. And inclusive and intersectional feminism that calls upon all of us to join the resistance to racism, to Islamophobia, to anti-Semitism, to misogyny, to capitalist exploitation.

“Women’s rights are human rights all over the planet and that is why we say freedom and justice for Palestine. We celebrate the impending release of Chelsea Manning. And Oscar López Rivera. But we also say free Leonard Peltier. Free Mumia Abu-Jamal. Free Assata Shakur.

“Over the next months and years we will be called upon to intensify our demands for social justice to become more militant in our defense of vulnerable populations. Those who still defend the supremacy of white male hetero-patriarchy had better watch out.

“This is just the beginning and in the words of the inimitable Ella Baker, ‘We who believe in freedom cannot rest until it comes.’ Thank you.”

“I am not eccentric. It’s just that I am more alive than most people. I am an unpopular electric eel set in a pond of catfish.” ― Edith Sitwell I decided to write this newsletter because for the past few weeks I’ve been more self-hating than usual. I feel like every time I leave my […]

I watched Ellen’s comedy special ‘Relatable’ on Netflix this weekend and beyond being hilarious, there was this beautiful part of the routine where she gets very candid and talks about her life and the power of manifestation. She talks about being broke, alone and believing in one idea so firmly, it got here to where […]

The Fear of Love and How I Came to Accept it