When most people hear the name Carrie Fisher they think Princess Leia…and cocaine. What they don’t think is author, mental patient and daughter of famous singer Eddie Fisher and actress Debbie Reynolds. They also don’t know that her father left her mother for her mother’s close friend, Elizabeth Taylor.

It’s no wonder that Carrie was doomed for the Hollywood black hole we find so many famous actors twirling around in. The difference with Carrie, however, is she’s not afraid to talk about it. Her first book, “Wishful Drinking” was turned into a one-woman play and then an HBO documentary. Her second book, “Postcards from the Edge” is an autobiographic account of her time in a mental hospital.

Her life has been full of ups (mainly from some expensive drugs) and lots of lows –from marrying a gay guy to having a friend die of an overdose in her bed. Through all of this, Fisher has managed to maintain her humor and in a world of make-believe, her honesty. 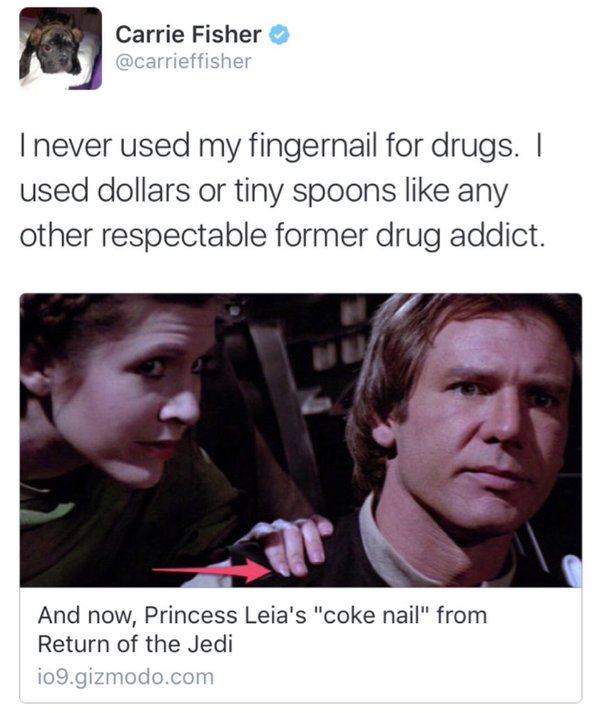 Life Lessons Women Could Only Pick Up From Their Mothers

INTERVIEWER Did you have fun growing up? WASSERSTEIN I did because my mother was eccentric. I always dream of what it will be like to be a mother. Will I be strict? Playful? Stressed? What excites and terrifies me most are what parts of myself –my eccentricities, my philosophies, my beliefs –will consciously or unconsciously […]

January Horoscopes: What Each Sign Should Be Working On For The Year Ahead

If there’s one thing we’ve learned about ourselves in 2017 it’s that we are resilient. I feel I can speak for all of us when I say that 2017 tested us, over and over again. But we’ve made it through and can breathe again. We can finally stop carrying the emotional baggage we’ve been dragging […]

[I]’m one of those people who doesn’t like to be alone with their thoughts. Actually, it may be the opposite. Because I’m so obsessed with avoiding my negative thoughts that I must always be thinking of something else. Thinking to avoid thinking. Because of this, I’ve never let myself disengage. I can’t turn off. I […]

Growing New Skin Amidst a Pandemic

The Signs As Sylvia Plath Quotes