The Story Of Katherine Johnson And Her Standing Ovation

“These women did not complain about the problems, their circumstances, the issues. We know what was going on in that era. They didn’t complain. They focused on solutions. Therefore, these brave women helped put men into space.”

The Oscars last night were unusually emotional. While they’re always full of beautiful moments and tearful speeches, there was something especially heartwarming surrounding the men, but mostly, the women of the evening.

One moment that stood out was the standing ovation for Katherine Johnson, whose life story and work at NACA was depicted in the film “Hidden Figures.” While the movie didn’t win best picture, it did receive a SAG award, where the actresses of the film gave a heartwarming speech about the three women who were overlooked in the their contributions to the American space program. One of these women was Katherine Johnson. At 98 years old, 40 years after her hard work and amazing contributions, Johnson finally received the recognition she deserves.

The shoulders of the women that we stand on are three American heroes; Katherine Johnson, Dorothy Vaughn, Mary Jackson. Without them, we would not know how to reach the stars.

Born in 1918 in White Sulphur Springs, W.Va., Johnson’s love for mathematics was inherent, an inclination she had from birth.
Johnson did so well in her classes that she graduated early from high school, and at age 15 she entered West Virginia State College. As a student, Coleman took every math course offered by the college. Multiple professors took Coleman under their wings, including chemist and mathematician Angie Turner King, who had mentored the girl throughout high school, and W.W. Schiefflin Claytor, the third African American to receive a PhD in math. Claytor added new math courses to the curriculum just for Coleman.

Johnson ended up teaching after college; at that time, teaching was the only option for her in her community. She left teaching to marry and start her family. When her husband fell ill in 1952, she began to teach again. And then one day, at a family function in the 1950s, a relative mentioned to Johnson that the National Advisory Committee for Aeronautics, the predecessor to NASA, was hiring.

Johnson began working for NACA in 1953. Her work in the agency was a day-to-day progression. She started as one of the women who worked on problems assigned from the engineers in what was then the Guidance and Control Branch. As Johnson worked on the problems, she would ask questions. She didn’t want to just do the work — she wanted to know the “hows” and the “whys” and then the “why nots.” None of the other women had ever asked questions before, but by asking questions, Johnson began to stand out. She was told that women didn’t participate in the briefings or attend meetings; she asked if there were a law against it. The answer, of course, was no, and so Johnson began to attend briefings. NACA was just beginning its work on space. 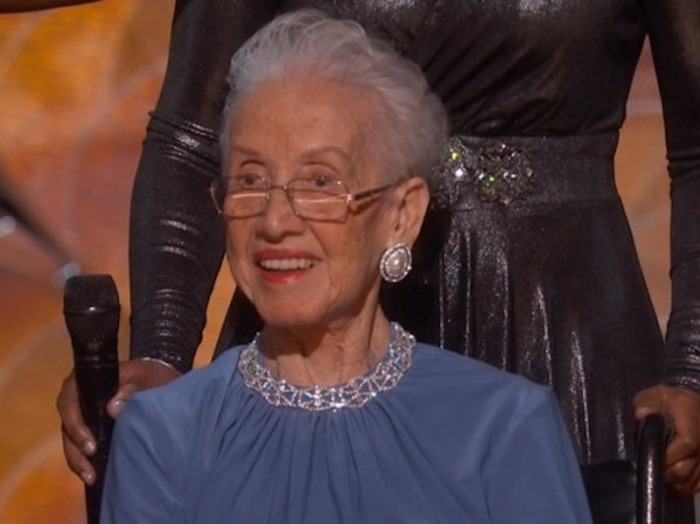 Space itself may be perceived as a series of plane surfaces, and as Johnson became known for her training in geometry, she began to work with the team more and more. Eventually, she became known as a leader, and the men increasingly relied on her. She remembers quite clearly her experience at the time. “The women did what they were told to do,” she explained. “They didn’t ask questions or take the task any further. I asked questions; I wanted to know why. They got used to me asking questions and being the only woman there.” It was this inquisitive nature that made her a valuable resource to the team and the only woman at the time to ever be pulled from the computing pool to work on other programs. Then in 1962, President John F. Kennedy charged the country to send a man to the moon. Johnson became part of the team, and she began to work on calculating the trajectory for America’s first space trip with Alan Shepherd’s 1961 mission, an early step toward a moon landing. She went on to do the calculations for the first actual moon landing in 1969.

In 2015, Johnson received the Presidential Medal of Freedom. She was included in the BBC series 100 Women the next year.

How Bette Davis Turned Criticism and Doubt Into Success

“In 1930, Davis moved to Hollywood to screen test for Universal Studios. Davis and her mother traveled by train to Hollywood and arrived on December 13, 1930. She would later recount her surprise that nobody from the studio was there to meet her at the train. In fact, a studio employee had waited for her, […]

Mina Loy is the pioneer of modern feminism. Mina Loy is the greatest poet since Walt Whitman. Mina Loy is unknown. According to Poets Org, In 1921 Ezra Pound wrote to Marianne Moore: “Is there anyone in America except you, Bill [William Carlos Williams] and Mina Loy who can write anything of interest in verse?” […]

Astrological Facts That Explain More Than Your Average Eclipse