What Ego State Are You Living In?

This week was a good one for me. I had a few days off work. Cleaned my apartment. And lashed out at not one, but two people. Go me!

As some of you know I’m “planning” my wedding. My fiancé has created a website. I could care less about the website, I care more about getting all his friends and relatives addresses. However, rather than giving me the addresses he creates a very beautiful website with an RSVP box.

“But then it will confuse the domestic guests.”

He emails the website to my family. The next morning my mom calls. She wants to talk about, guess what? The website! The RSVP button is confusing. “I know, I told him that but he doesn’t want to change it.”

Ok, well I don’t understand. Are we not sending RSVP cards then? Because we shouldn’t send it to some and not others.

“OMG I DON’T KNOW. I don’t care! It’s a fucking dumb website. You talk to Jay and figure it out! I can’t fucking deal with this.”

“Don’t be an ass, Lauren” are the last words my mother says before I hang up on her. My fiancé then proceeds to tell me he will definitely not be marrying me if I keep behaving like this.

Hmmm..this situation looks very familiar. Me creating chaos out of a very manageable and not at all stressful situation. But there’s something about about my mom that triggers me. And there’s this pattern I’ve seen emerging lately. I’m either reacting to my mom or acting like her. I’m either behaving like a child or mimicking my mom. WHAT’S GOING ON??!

It’s these encounters with others that show us who we are and what we’re actually like. And if you care enough to look honestly at yourself, you’ll start to see patterns.

WHAT IS TRANSACTIONAL ANALYSIS?

Transactional analysis (TA) is a psychoanalytic theory and method of therapy wherein social transactions are analyzed to determine the ego state of the patient as a basis for understanding behavior.

Dr. Eric Berne developed TA to help people reach insights about their behavior and clear the cobwebs and reach “now I get it!” conclusions about their actions and relationships. Inspired by Sigmund Freud’s personality theories, particularly his belief that the human psyche is multi-faceted, and combined Freud’s theory with human interactions that he had personally observed.

In working with people he found out personality is divided into three parts. Inside everyone is the parents figures they once had, the adult that thinks and the child they once were.

Parent: a state in which people behave, feel, and think in response to an unconscious mimicking of how their parents (or other parental figures) acted, or how they interpreted their parent’s actions.

Adult a state of the ego which is most like an artificially intelligent system processing information and making predictions about major emotions that could affect its operation.

Child: a state in which people behave, feel, and think similarly to how they did in childhood.

2 sides of child state: Adapted (to demands of parents) or Free (does what he/she likes)

1 sides of adult state: There are no two sides to adult state. It’s thought to have access to all information. It’s the goal of TA therapy- to strengthen the adult state and find harmony between the child and the adult. Because the child and parent aren’t bad.

Every ego state has value at different times. Your parent is useful is someone is ill or hurt or sad. It also enables the individual to act effectively as the parent of actual children, thus promoting the survival of the human race. Your child state is great for creativity.

THE WAY WE INTERACT WITHIN EGO STATES

The second part of TA is based on transactions. How our ego states define our interactions.

Every interaction begins with two people meeting in the Adult state. Depending on circumstances, events, dialogue, you will have a transaction that reverts both of you to different states. Which state you revert to is up to you.

Ideally, you read the situation and your Adult State decides what is the most appropriate way to respond to the person, event, circumstance.

According to Berne, transactions between two Adults are often the simplest and easiest because of their reasonable, rational nature. When the receiver’s transaction response is geared toward the speaker’s ego state, it is referred to as a complementary transaction. Berne believes that communication will easily continue as long as the transactions continue to be complementary. 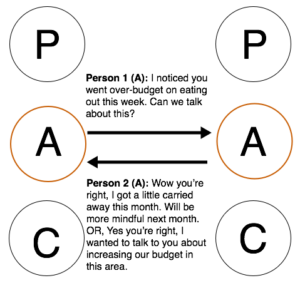 When someone leaves their adult state, however, and approaches you, you may find yourself reverting to other states in response. A great example of this is when parents talk to us. Event hough we’re adults now, we revert to our Child states upon hearing them in their Parent state. 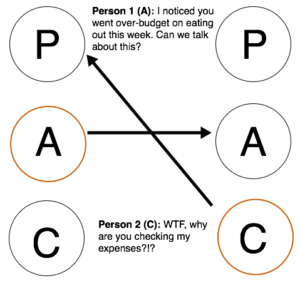 And that’s when we start to feel depressed, isn’t it? When we’ve acted “out of character” or disappointed ourselves. But the great thing is, we can change our ego states whenever. We can stop reverting the same old script. And better yet, we can start understanding people from their ego states and stop getting offended by their behaviors.

According to TA, all communication breakdowns occur because of a crossed transaction.

An enlightened adult will understand which ego state someone is coming from and be able to respond accordingly. While Adult is always a healthy state to be in, sometimes the Adult state doesn’t respond well when someone has regressed into childhood state. And that’s your job to understand and read.

According to Natali Morad, these are the best ways to use TA to improve your communication and monitor your ego state for a more fully-integrated life.

A good way to know if your Adult ego state is activated is to examine whether your questions/comments are fueled by compassion and curiosity, or the desire to blame, criticize or prove a point.

Not Yours To Touch

You’re in fourth grade. You’re the first girl to reach the age of training bras and awkward curves. He walks up behind you and snaps your bra strap, creating a roar of laughter through the hallway. The sing song of prepubescent boys. You’re ten years old. You’re walking your dog in the neighbourhood you know […]

Temptations To Avoid in 2019

Along with setting your one resolution, think about setting an avoidance. Some temptation or bad habit that you’ll conciously work on eradicating. Simone Weil was a French philosopher, mystic, and political activist. Albert Camus described her as “the only great spirit of our times”. She studied at the École Normale Supérieure – a French grande […]

What Your Third Zodiac House Says About How You Communicate

The Ascendant, also known as the Rising Sign, marks the beginning of the horoscope birth chart. The Ascendant is the most important angle of the chart and forms the cusp of the first house. The Ascendant marks your entry into this world at the moment of birth. The twelfth house is the house of confinement […]

Navigating February: The Shortest Month For The Longest Results

The Qualities of the Growth Mindset: Do You Have One?

Heal Your Soul: The Best Quotes For Those In Pain