Diane Keaton’s Best Pieces Of Advice On Her 71st Birthday

Nobody does polka dots, oversized belts, turtlenecks, suits or living an avant-garde life better than Diane Keaton. She is the latest AFI Lifetime Achievement Award honouree and a ‘when life doesn’t give you lemons, go out and pick them yourself’ kind of woman.

Diane has always been insecure about her appearance. At age eleven she looked in the mirror and concluded that she was disappointing. She didn’t look like Debbie Reynolds, Dorris Day or any of the women she deemed classically beautiful. Yet she rapidly became an icon of both style and beauty, which she refuses to accept, even now. Nevertheless, her anxieties haven’t stood in the way of her winning an Oscar and a Golden Globe for performances on the big screen, where everyone can see that she’s far from disappointing.

In her twenties she developed bulimia after overhearing girls in a dressing room discussing this ‘thing’ you could do in order to lose weight. It was a four-year battle of binging on 20,000 calories a day, curbing and regurgitating her cravings. She saw a psychoanalyst five days a week for a year and abruptly decided one day to stop compulsively eating. She’s not done it since. Now Diane channels her compulsiveness into her work, family and Pinterest boards.

Despite being romantically linked to a few men, including Al Pacino, Warren Beatty and of course Woody Allen, Keaton has never married. No one ever asked her. But she asked all of them. And all of them said no. In what universe does a man turn down Diane Keaton? Though she acknowledges the missing piece in her puzzle, she doesn’t feel as though it’s given her life any less meaning. Like many women, she found it hard to put herself out there, and at seventy she still hasn’t conquered that fear. The instinct to protect yourself is hard to shake. Some manage it, some don’t. But you don’t owe it to anyone to settle, to let someone in, to accept a love less than your heart desires. Diane is living proof of the fact that you’re just you and it’s your life. End of.

When she reached middle-aged, she decided she wanted to become a mother. Keaton was still single but that detail didn’t faze her. She threw the rulebook out the window and adopted her daughter, Dexter in 1996 followed by her son, Duke in 2001, by herself. It’s never too late to go out and get what you want.

In the last scene of Annie Hall, Diane’s character Annie says, “It reminds me of that old joke- you know, a guy walks into a psychiatrist’s office and says, hey doc, my brother’s crazy! He thinks he’s a chicken. Then the doc says, why don’t you turn him in? Then the guy says, I would but I need the eggs. I guess that’s how I feel about relationships. They’re totally crazy, irrational, and absurd, but we keep going through it because we need the eggs.” Her character might have needed the eggs, but Diane Keaton has demonstrated the difference between needing and wanting the eggs. You don’t need them. Don’t settle, in any aspect of your life. Don’t let anything get in your way. Mutter “Well, la-dee-da-la-dee-da-la-la”, to yourself as Annie did and keep on keeping on. 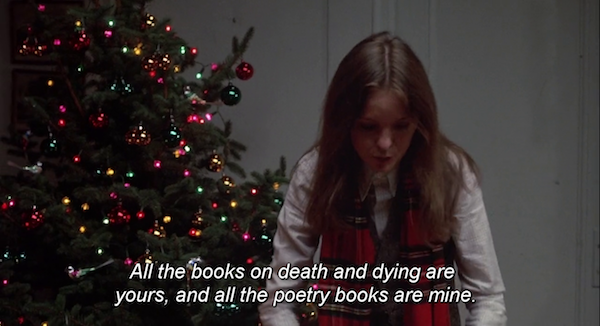 “Even though all these obstacles keep coming at you, you just have to keep going through them. Because it’s worth it to do something in your life, as opposed to fantasizing about doing something.”

“Motherhood has completely changed me. It’s just about like the most completely humbling experience that I’ve ever had. I think that it puts you in your place because it really forces you to address the issues that you claim to believe in and if you can’t stand up to those principles when you’re raising a child, forget it.”

“I had a career and I came to motherhood late and am not married and have never had such a trusting relationship with a man – and trust is where the real power of love comes from.”

“The best relationships develop out of friendships.”

“I remember when I was young I honestly believed in some ridiculous way that you would find someone who would be the person you lived with until you died. I don’t think that because I’m not married it’s made my life any less. That old-maid myth is garbage.”

“This living stuff is a lot. Too much, and not enough. Half empty, and half full.”

“I have a policy about fear: It cripples the soul, so you just have to fight it.”

“Life is short and experiences with remarkable people are rare.”

“Here is my biggest takeaway after 60 years on the planet: There is great value in being fearless. For too much of my life, I was too afraid, too frightened by it all. That fear is one of my biggest regrets.”

“What is perfection, anyway? It’s the death of creativity…”

“What makes a heroine? I think I can answer that. A heroine is a woman who risks going too far in order to find out how far one can go for a cause greater than herself.”

Joan Didion’s Lessons On Growing Up

Joan Didion is an institution. Not just an American one, but a feminine one. During her senior year at the University of California, Berkeley she won first place in an essay contest sponsored by Vogue, and was awarded a job as a research assistant at the magazine. For two years at Vogue, Didion worked her […]

Use The Power Of Feng Shui To Cleanse Your Life