Julie Delpy is a French actress most known for her roles in the “Before Sunrise” trilogy. What most people don’t know, however, is Delpy has not only stared in over 30 films, but has also written and directed a good amount of them.

Many cinefiles are well aware of “Before Sunrise” and its contribution to American cinema. Considered the most “significant films of the 1990’s independent film movement,” it changed the format of America’s notion of the romantic comedy with no action, no drama, nothing but insightful dialogue between two strangers falling in love while walking around Vienna. The movie was a collaborative process between director, Richard Linklater and the two actors he cast to play the only two roles of the film- Ethan Hawke and Julie Delpy.

Describing the experience Delpy said, “I’m not a feminist wearing overalls and hating the male gender. But I’m a definite feminist. I don’t want to make Before Sunset into a little male fantasy, ever.” She received an Academy Award nomination for Best Adapted Screenplay for her work.

If you’re a fan of the movie, you understand why it’s such an independent success and why Celine is such an enigmatic character. The dialogue between her and Ethan Hawke for 105 minutes is captivating and subtle at the same time. Who ever thought two twenty-somethings talking about life, love and death could be so riveting? So beautiful? So perfect?

This dynamic French actress brought a new level of conversation and in her pursuit of truth, delivered some of the greatest lines in not just movie history, but life.

If you’ve seen “Before Sunrise” you know what beautiful lines I’m referring to. If you haven’t, well today is the perfect Sunday to start. If you’re still in doubt, just check it’s 100% on Rotten Tomatoes….

“I always feel this pressure of being a strong and independent icon of womanhood, and without making it look my whole life is revolving around some guy. But loving someone, and being loved means so much to me. We always make fun of it and stuff. But isn’t everything we do in life a way to be loved a little more?”

“You can never replace anyone because everyone is made up of such beautiful specific details.”

“I guess when you are young, you believe that you will meet many people with whom you’ll connect with, but later in life you realize it only happens a few times.”

“Too many women throw themselves into romance because they’re afraid of being single, then start making compromises and losing their identity. I won’t do that.” 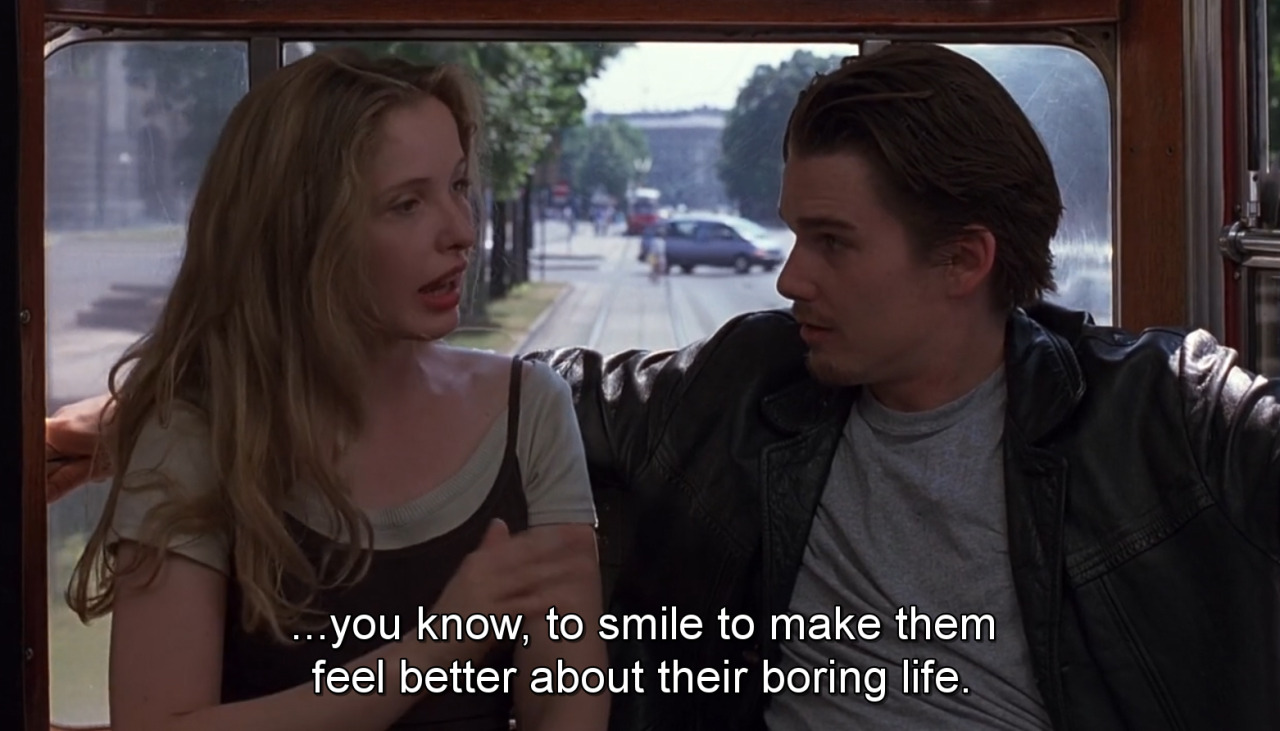 “Even being alone it’s better than sitting next to your lover and feeling lonely.”

“Isn’t everything we do in life a way to be loved a little more?”

“It’s not so easy for me to be a romantic. You start off that way, and, after you’ve been screwed over a few times, you… you forget about all your delusional ideas, and you just take what comes into your life. That’s not even true! I haven’t been… screwed over, I’ve just had too many… blah relationships. They weren’t mean, they cared for me, but… they were no real… connection, or excitement! At least, not from my side.”

“So often in my life I’ve been with people and shared beautiful moments like travelling or staying up all night and watching the sunrise, and I knew it was a special moment, but something was always wrong. I wished I’d been with someone else. I knew that what I was feeling – exactly what was so important to me – they didn’t understand.”

“Memory is a wonderful thing if you don’t have to deal with the past.”

Angela Ahrendts: How To Use ‘Good Energy’ To Succeed In Business

Our greatest weakness is lack of self-confidence. — Angela Ahrendts, CEO of Burberry at the Ball State 2013 Commencement Speech Angela Ahrendts is an American businesswoman and the senior vice president of retail at Apple Inc. Before her impressive position at Apple, she was the CEO of Burberry from 2006 to 2014. Ahrendts was ranked […]

Entrepreneur Mary Kay, founder of Mary Kay Inc., built a profitable business from scratch that created new opportunities for women to achieve financial success. Born in 1918 in Texas. Ash was a pioneer for women in business, building a substantial cosmetics empire. In 1939, Ash became as a salesperson for Stanley Home Products, hosting parties […]

Part 2: Quotes That Describe Cities & The People Who Live In Them

An English professor once told my short stories class that if you want to be a writer, it’s imperative you live in New York at least once in your life. I took his advice to heart and moved to New York not after graduation, but during it. Eight years later, I understand his advice in […]

You Need To Know Linda Rodin

A Psychological Trick That Keeps You From Worrying