Patti Smith is an icon. Unlike most icons, however, you can’t pinpoint her talent to one skill. She’s a musician, poet, painter, writer —an artist. She’s not shackled by the identity of one profession, but inhibits all of them under the umbrella of the artist.

There’s a famous line in her autobiography, “Just Kids”, in which she describes the calling and reasoning behind her need to become an artist.

“I longed to enter the fraternity of the artist: the hunger, their manner of dress, their process and prayers. I’d brag that I was going to be an artist’s mistress one day. Nothing seemed more romantic to my young mind. I imagined myself as Frida to Diego, both muse and maker. I dreamed of meeting an artist to love and support and work with side by side.”

Robert Mapplethorpe would be instrumental in molding her identity as an artist. In one illuminating passage Patti admits that it was Robert who exemplified what it meant to consider yourself an artist. He takes away her doubts and stood as a testament of the artistic soul. He  explains that the world will never declare you an artist. You are not an artist because people say you are. You are an artist in your own right, in what you do, and the rest of the world will soon declare it the moment you decide to become it. 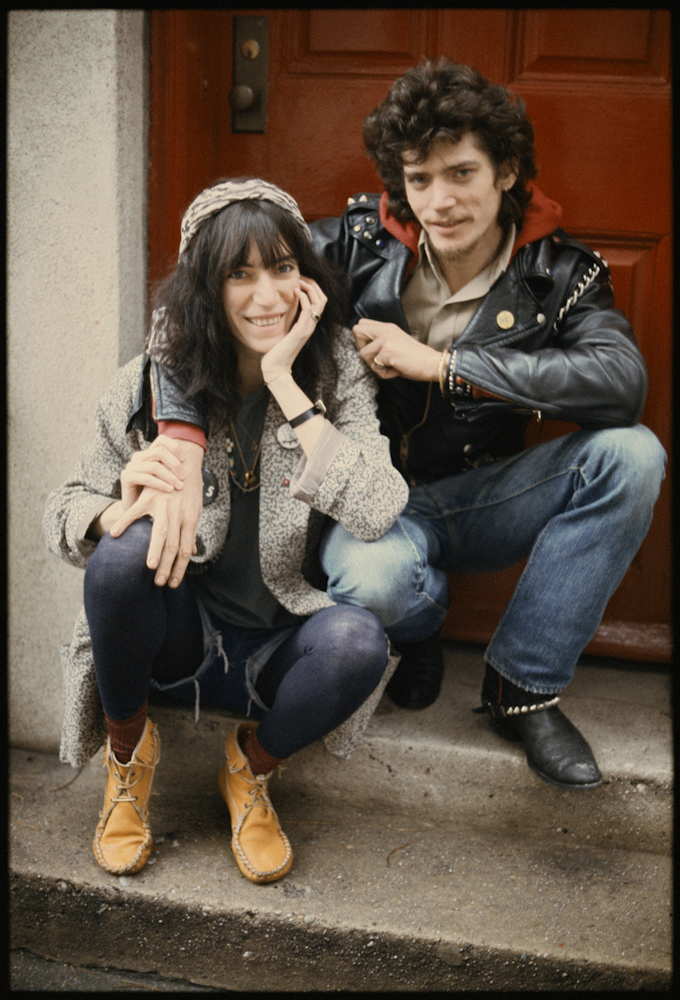 “Just Kids” went on win the National Book Award. Anyone who has read it knows why. For many artist, it’s become a code –a Bible. It’s a source of inspiration and hope.

She describes that feeling she had – that feeling we’ve all felt- when we’ve seen someone achieving something we know we can do. She recalls this feeling while at a Jim Morrison concert;

“I felt, watching Jim Morrison, that I could do that. I can’t say why I thought this. I had nothing in my experience to make me think that would ever be possible, yet I harbored that conceit. I felt both kinship and contempt for him. I could feel his self-consciousness as well as his supreme confidence.”

For those who haven’t read it, “Just Kids” is an intimate look at Patti’s young life and her road to self discovery and fame. After becoming pregnant at in New Jersey, giving up her baby and heading to New York for a fresh start, she would enter New York in the 60’s a time when it was full of crime, dirt and magic. She would meet Robert Mapplethorp while sleeping in the park and the two would  became roommates, lovers and best friends.

What illuminates throughout the book is their dedication to the artistic way—their refusal to give up that spark inside them for the comforts of traditional society.

Both would go on to achieve fame in their work, however it’s not their achievement of fame that makes the book worthwhile. What makes the book magical is the mindset of Patti and Mapplethorp. Their dedication to each other and the spirit of friendship. It’s a beautiful portrait of what it’s like to be young and full of hope. It’s a testament to following your spirit, and never giving up on that tiny spark of hope you have for yourself.

Below are the most beautiful quotes of Patti that will inspire any artist to keep going:

“I had no proof that I had the stuff to be an artist, though I hungered to be one”

“It was a good day to arrive in New York City. No one expected me. Everything awaited me.”

“A writer or any artist can’t expect to be embraced by the people. I’ve done records where it seemed like no one listened to them. You write poetry books that maybe 50 people read. And you just keep doing your work because you have to, because it’s your calling.”

“When I was really young, William Burroughs told me, “Build a good name. Keep your name clean. Don’t make compromises. Don’t worry about making a bunch of money or being successful. Be concerned with doing good work. And make the right choices and protect your work. And if you can build a good name, eventually that name will be its own currency.” 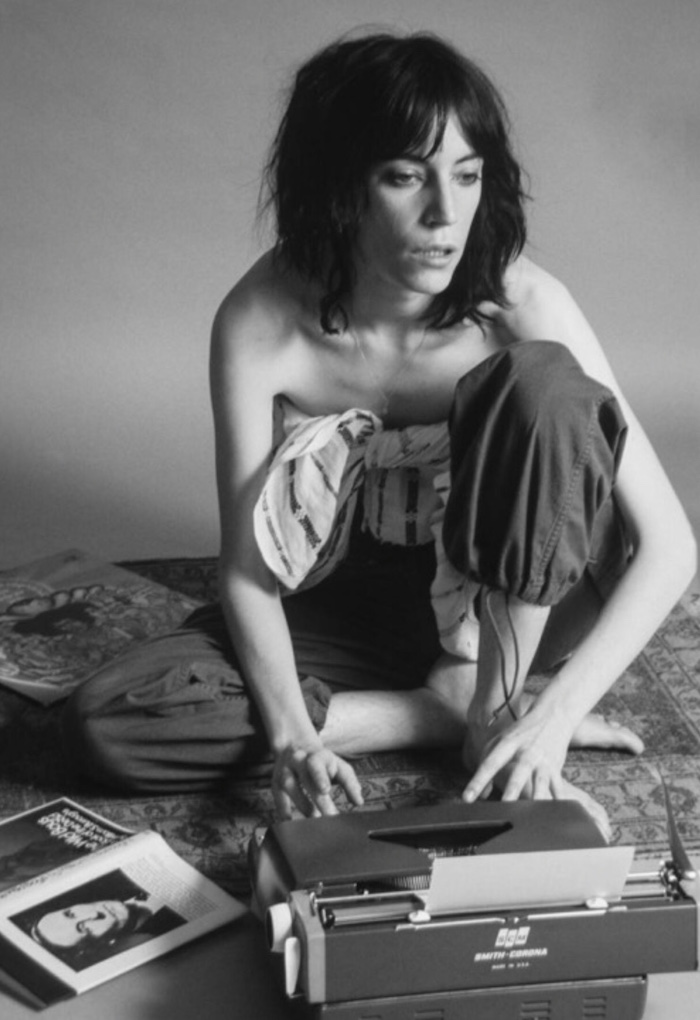 “If I got lost along the way I had a compass that I had found embedded in a pile of wet leaves I was kicking my way through. The compass was old and rusted but it still worked, connecting the earth and stars. It told me where I was standing and which way was west but not where I was going and nothing of my worth.”

“I had to learn, really, how to rein in my energies and discipline myself. And I found it very very useful. I rebelled against it at first, but it’s a good thing to have.”

“I was both scattered and stymied, surrounded by unfinished songs and abandoned poems. I would go as far as I could and hit a wall, my own imagined limitations. And then I met a fellow who gave me his secret, and it was pretty simple. When you hit a wall, just kick it in.” 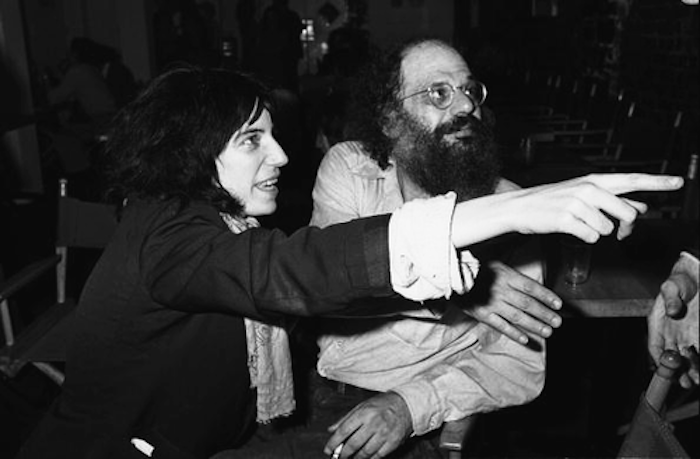 “Let’s just say that I think any person who aspires, presumes, or feels the calling to be an artist has a built-in sense of duty.”

“I was superstitious. Today was a Monday. I was born on Monday. It was a good day to arrive in New York City. No one expected me. Everything awaited me.”

“I longed to enter the fraternity of the artist: the hunger, their manner of dress, their process and prayers. I’d brag that I was going to be an artist’s mistress one day. Nothing seemed more romantic to my young mind. I imagined myself as Frida to Diego, both muse and maker. I dreamed of meeting an artist to love and support and work with side by side.”

For more inspiration, sign up for the morning newsletter.

Dear Betsy; You are sensitive to your own feelings; you indulge yourself in feelings which are always and exhaustingly about your reactions to people and events. You haven’t the faintest idea about other people’s feelings – how you affect them. You invent complications, you analyse without reason or need very simple occurrences, and you analyse […]

January Horoscopes: What Each Sign Should Be Working On For The Year Ahead

If there’s one thing we’ve learned about ourselves in 2017 it’s that we are resilient. I feel I can speak for all of us when I say that 2017 tested us, over and over again. But we’ve made it through and can breathe again. We can finally stop carrying the emotional baggage we’ve been dragging […]

Why Every Sane Woman Should Feel Crazy

Glennon Doyle Melton began her online writing career in 2009, with the creation of her blog, Momastery. The funny, conversational and tell-all nature of her writing quickly gained popularity. Viral blog posts beginning with “2011 Lesson #2: Don’t Carpe Diem” led to the publication of her memoir, Carry On, Warrior and the growth of her […]

A Reminder from Simone de Beauvoir: Women are Not the Second Sex